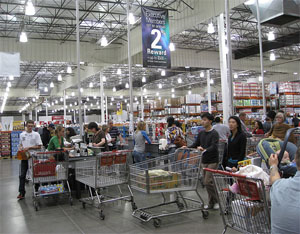 The largest membership warehouse club chain in the United States, Costco has over 570 stores in not just the U.S. but worldwide, including locations in Canada, Mexico, the United Kingdom, Japan, South Korea, Taiwan, and Australia.

Costco is the third largest retailer in the United States (behind Target and Wal-Mart) and the ninth largest in the world. So, out of all of its locations around the world, just which one is the busiest? The answer may surprise you.

While it is in the United States, the busiest Costco is located in Hawaii, on the island of Oahu. The company actually has three stores on the island, but the one in Iwilei easily takes the title as the location that gets the most business.

Also the largest store out of the three in Oahu, the Iwilei Costco rakes in a lot more money than others, according to The Seattle Times.

While the average Costco warehouse rings up $129 million each year, the Costco in Iwilei posts $300 million in sales annually.

Why is this particular location so popular? Costco maintains that nearly one in every four island residents carries a Costco card from this store. On all of the island of Oahu, half the residents shop at Costco. The store is so busy that its entire inventory is gone about two times each month.

Have you been to the Iwilei Costco? What was your experience like?

Also, what do you think are some of the busier or more crowded Costco locations? Be sure to let us know in the comments below.