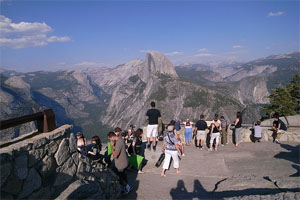 Along with the changes of the seasons at Yosemite comes changes in the crowds that descend to the attractions and destinations of the popular National Park.

Yosemite greets about 4 million people every year, however, most of them only spend their time at Yosemite Valley. According to Wikipedia:

The Valley is the main attraction in the park for the majority of visitors, and a bustling hub of activity during “tourist season,” with an array of visitor facilities clustered in the middle. There are both hiking trail loops that stay within the valley and trailheads that lead to higher elevations, all of which afford glimpses of the park’s many scenic wonders.

So, when is Yosemite packed and when is it least crowded? Let’s take a look at the park’s crowd levels for each of the seasons.

June through September is the busiest time of the year at Yosemite.

During these months, expect Yosemite Valley to be packed with tourists, as well as many of the hotels and lodging around the area to be booked full.

There are, however, some advantages to going to the park in the summer. By late May or early June, all areas of Yosemite are accessible by car. As for the weather, it’s generally dry; warm to hot, but the occasional rain and thundershower isn’t out of the ordinary.

If you’re looking for light crowds and decent weather, fall is a great time to visit Yosemite.

All areas of the park usually remain open through October and sometimes even November. However, there may be some temporary closures due to snow.

Winter at Yosemite is described as the season of snow and solitude.

Yosemite Valley remains open through winter and is accessible by car all year. However, there are road closures due to snow to contend with. You can learn more about them here.

Spring (April and May)

Spring is also a great time to visit Yosemite. The summer crowds aren’t out just yet, so Yosemite Valley is typically light to moderate. Some roads do remain closed due to snow.

Keep in mind that with the weather warming up during spring, all the snow begins to melt, resulting in the park’s waterfalls, including Yosemite Falls, to be out in full force. They’ll usually be gone or down to a trickle by summer.

When’s your favorite time of the year to visit Yosemite? How are the crowds? Let us know in the comments.