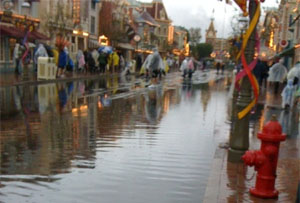 Even in sunny Southern California and even at the Happiest Place on Earth, the weather just doesn’t cooperate sometimes.

Rain or shine though, the show must go on at the Anaheim theme park, giving the lucky guests who show up a rare opportunity to tread a wet but relatively empty Disneyland.

Despite showers, most of the rides and attractions at the park actually remain open as they’re indoors. Others, however, like the spinning tea cups at Mad Tea Party, close due to safety concerns (like a slippery floor) as they are outdoors.

As for the shows, a lot guests may be surprised to find out that the fireworks can go on as usual in the rain. It’s not the rain but the wind that cancels the fireworks. High winds “at higher elevations” cause delays and cancellations of the show multiple times every year. When it rains at Disneyland, however, it’s usually accompanied by a little wind, so fireworks in the rain is a rare occurrence, but it does happen from time to time.

The nighttime show Fantasmic!, on the other hand, is usually cancelled when it rains due to a wet and slippery stage.

Still, it is possible for heavy rain to force Disneyland to close. In fact, it’s happened just this year back in January. Disneyland and Disney California Adventure opened as normal, but both parks closed a couple hours earlier than scheduled.

So, what’s the deal? Some speculate that with the especially low turnout to the theme parks when it rains, it simply doesn’t make financial sense to stay open. The nearby Knott’s Berry Farm doesn’t even open its gates on rainy days, but most of its rides are outdoors. There’s also safety concerns. It’s obvious that many areas of the resort can’t handle large amounts of water. Even parts of Main Street U.S.A. are known to become flooded after a storm. 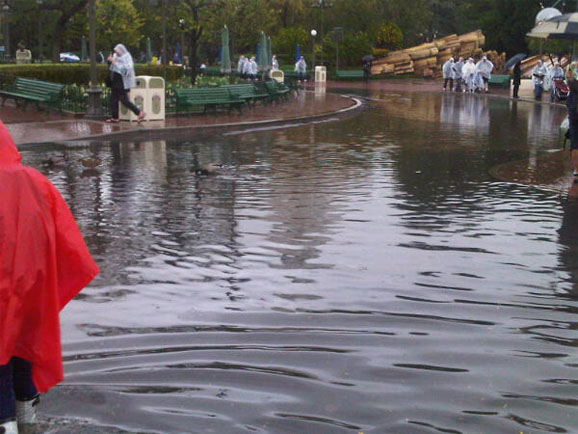 “Unfortunately, current weather conditions do not allow us to provide the best possible guest experience,” read the official Disney statement for the early closures.

For real-time updates and information on current crowd levels and conditions at Disneyland, including the weather, check out the Live Crowd Tracker.

Have you gone to Disneyland when it rains? What was your experience like? Be sure to let us know in the comments below.