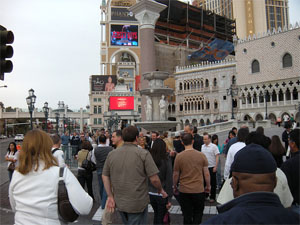 When is the best time to visit Las Vegas? Sin City is one of the most popular tourist destinations in the United States, with over 30 million visitors each year.

That makes Vegas one of the most crowded places as well. Unlike theme parks like Disneyland, where there is typically a break from the big crowds between the Spring Break, summer, and holiday seasons, Las Vegas tends to be busy year-round.

Some months are busier than others though. Here’s some holidays and weekends you may want to try to avoid.

New Year’s Eve/Day – One of the busiest times of the year, Vegas is typically packed for New Year’s. Vegas.com says that room rates are sometimes doubled for the holiday, so book early.

CES – The popular Consumer Electronics Shows draws over 100,000 attendees every year, usually in the first or second week of January.

After the holiday season, New Year’s, and CES are over with, Vegas traditionally sees a dip in the number of visitors. MLK Weekend doesn’t tend to be a very busy holiday. Weekdays (Monday-Thursday) tend to be least crowded.

Super Bowl Weekend – The busiest weekend of the year for Vegas sports books, an influx of close to 300,000 visitors are expected every year for Super Bowl Sunday.

NASCAR Weekend – Race fans descend on the city for the annual NASCAR weekend at the Las Vegas Motor Speedway in early March.

Electric Daisy Carnival – The summer season crowds are typically out in full force by June, with schools starting to get out of session and families on vacation. EDC is the largest electronic music festival in the world, attracting more than 300,000 people. It takes place in Vegas every year in June, so try to avoid this weekend if you can.

4th of July Weekend – Vegas is typically crowded for the Fourth, especially if the holiday falls on a weekend.

Thanksgiving Weekend – The four-day weekend typically draws a slew of visitors. After Thanksgiving, visitation drops as the slow season begins in early December.

NFR – The rodeo is in town! The National Finals Rodeo is a wildly popular event in early December. Crowds are traditionally manageable on the Strip, however, for most of December until Christmas week.

Holiday Season – Las Vegas starts to get packed for the holiday season on the week of Christmas through the end of the month (New Year’s). Book early and be prepared for big crowds.

When do you think Vegas is least crowded? Have you gone on any of these weekends or holidays? What was your experience like?