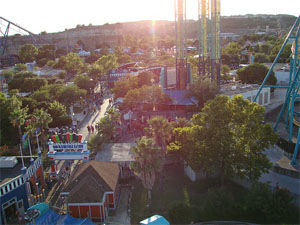 The second Six Flags park in Texas (the other being Six Flags Over Texas in Arlington), Fiesta Texas features 50 rides, including 8 roller coasters. The park is located in San Antonio and also includes White Water Bay, a separate water park.

So when exactly is the best time to go to Fiesta Texas? The park is open from late March through January, and some days are busier than others. Here’s what the crowds look like throughout the operating season.

Opening Day – Six Flags Fiesta Texas opens for the operating season on the first weekend of March, and crowds are usually manageable for the opening weekend.

Spring Break – Schools in the area are out for Spring Break in mid-March. That means the park is open all week and it’s typically packed. Crowds are lighter on the weekends after Spring Break, especially on Sundays.

Weekends – Fiesta Texas is open on weekends in April, and crowds usually aren’t too bad. Sundays are least crowded.

Weekends – It’s not the summer season just yet. The park is open on weekends in May, and Sundays are again your best bet for lighter crowds.

Summer Season – Six Flags Fiesta Texas is open everyday in June for the summer season crowds. The earlier you go in June, the better. Crowds start to pick up by the second week of the month. Weekdays are still busy, but usually less crowded than the weekends.

4th of July Weekend – The summer crowds are out in full force by July, and it’s typically very crowded for the 4th of July holiday.

Weekdays – August marks the end of the busy summer season. More schools get back in session throughout August, so the later in the month you go, the less crowded it will be. Go on weekdays for smaller crowds.

The park is only open for a couple weekends after Labor Day, and it usually isn’t very crowded.

Fright Fest – Fright Fest takes over on weekends in all of October. Attendance to the Halloween event is highest on Saturdays. Try to get there early in the day for more manageable crowds.

Weekends – Fiesta Texas is open for the first few weekends in November, and crowds are typically light.

Holiday in the Park – The holiday event starts on Thanksgiving Weekend and into January. Crowds are typically light to moderate, but do start to pick up after Christmas and into New Year’s Eve. Fiesta Texas is closed on Christmas Eve and Christmas Day.

How were the crowds the last time you visited Six Flags Fiesta Texas? When do you think is the best time to go? Be sure to let us know in the comments below!