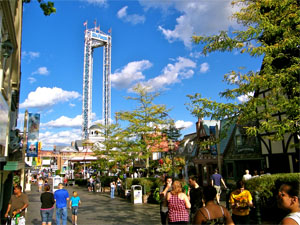 When is the best time to go to Six Flags New England?

The oldest park in the Six Flags chain, Six Flags New England is located in Massachusetts and less than a mile from the Connecticut border. The park features 46 rides, including 11 roller coasters.

Six Flags New England is a popular destination for locals and tourists, but when is it least crowded? Let’s take a look at what the crowds look like throughout the year.

Opening Day – Six Flags New England opens for the season on the second Saturday of April, and crowds tend to be manageable for opening weekend.

Spring Break – Crowds pick up for Spring Break on the week of Easter. That’s when many schools in area are out of session, so be prepared for the park to be busy. Saturdays are most crowded.

Weekends – Crowds are lighter early in May, especially on Fridays and Sundays. Avoid Saturdays if you can.

Summer Season – Six Flags New England is open everyday in June for the summer season, and the earlier you go the better. Weekdays (Monday – Friday) on the first two weeks of June are best time to visit. Saturdays and Sundays are usually packed throughout the month.

The summer crowds are out in full force by the last week of June, as most schools are out of session by then.

4th of July Weekend – The summer season is in full swing by July. The park is typically very crowded for the 4th of July holiday.

July is the busiest month at Six Flags New England, so there’s not much relief from the summer crowds. If you must go, avoid the weekends.

Weekdays – The summer crowds are still out in most of August. This time, the later in the month you go the better as schools get back in session. Weekdays are again your best bet for lighter crowds. Crowds are typically back to manageable by the last week of August as the summer season comes to an end.

Labor Day Weekend – Crowds are back for the three-day weekend, so be prepared for long lines.

After Labor Day, the park is only open on weekends in September and the crowds are a lot more manageable than in the busy summer months. Sundays are least crowded.

Fright Fest – Fright Fest takes over in October on Fridays, Saturdays, Sundays, and the first weekend of November. The popular Halloween event draws big crowds, so try to get there early.

When do you think is the best time to visit Six Flags New England? How crowded was it when you went? Be sure to let us know in the comments below!