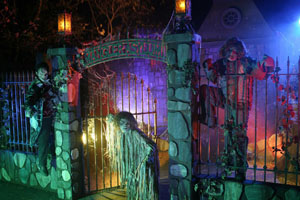 Every year in late September when the days slowly get shorter and make way for more chilly nights in Southern California, you know that it’s that time of the year again – when Knott’s Berry Farm transforms to Knott’s Scary Farm.

With “160 acres of horror” via a series of over 1,000 monsters, several mazes, and a collection of scare zones, Haunt is indeed pretty impressive, but what about the crowds?

It’s a complaint we hear often from attendees of the event. Lines for mazes can easily stretch to over 1-hour waits, and with Haunt only open for a few hours (usually 6-7 hours), that leaves many guests unable to experience all of the attractions.

So, when is the best time to go to Knott’s Scary Farm?

Check out our updated Knott’s Scary Farm: Best & Worst Dates to Go crowd guide, where we handpick the best and worst nights to visit every year. Be sure to also check the Knott’s Berry Farm Crowd Calendar in the months of September and October for crowd predictions (dates will be marked as “KSF”).

Knott’s tells us that the busiest days are Fridays and Saturdays. On these nights, expect the park to be packed with people. Don’t be surprised to run into heavy street traffic on the way there, either. There’ll be a line to get in, long lines for the mazes,and long lines for the rides, so be prepared if you plan on going to Haunt these nights.

Sundays, Wednesdays, and Thursdays are usually the lightest days for crowds (the event isn’t typically held on Monday and Tuesday nights). By no means will the park be dead-empty, but it generally shouldn’t be too crowded on these nights.

A good rule of thumb to find the most and least crowded nights is to simply look at the Knott’s Scary Farm calendar for ticket sales. On nights when it is expected to be packed, tickets will be more expensive (around $50). For the least crowded days, just look for the lower ticket prices.

For real-time updates and information of current crowd levels and conditions at the park, check out the Knott’s Berry Farm Live Crowd Tracker.