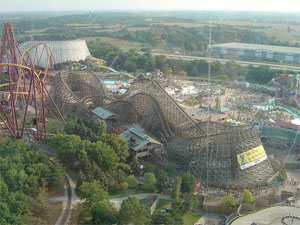 When is the best time to go to Six Flags Great America?

Located in the Chicago metropolitan area, the Six Flags theme park features a total of 51 rides, including 13 roller coasters, and the Hurricane Harbor water park open in the summer.

Six Flags Great America is only open six months out of the year (May – October), so just when is it least crowded? Let’s take a look at what the crowds look like throughout the operating season.

Opening Day – The first weekend of May is typically opening weekend at Great America, and it gets busy. Try to get there early if you can to avoid the longer lines.

Weekdays – Great America starts opening on weekdays in mid-May, and they are perhaps some of the best days of the year to visit the park. Crowds are usually light.

Weekends – Weekends in May are traditionally crowded and it only gets busier toward the end of the month. Sundays are typically least crowded.

Summer Season – Six Flags Great America is open everyday in June, as the summer season kicks off. The earlier in June you go, the less crowded it tends to be, as more and more schools get out later in the month. Weekends (especially Saturdays) are packed throughout June, so aim for going on the weekdays if you can.

The summer season crowds are traditionally out in full force by the last week of June.

4th of July Weekend – The summer season is in full swing by July. Great America is typically very crowded for the 4th of July holiday.

There’s really not much relief from the summer crowds in all of July, as it’s the busiest time of the year at Six Flags. If you must go, avoid the weekends.

Weekdays – The summer season finally starts to wind down in August as schools get back in session. This time around, the later in the month you go the better. The summer crowds are still around for the first two weeks of the month, but start to lighten up by mid-August. Weekdays are least crowded.

After Labor Day, the park is only open on weekends in September and the crowds are more manageable than in the busy summer months. The park is closed on some Saturdays and Sundays for private events, so be sure to check with SFGAm’s events page.

Fright Fest – Fright Fest takes over in October on Fridays, Saturdays, Sundays, and select weekdays. The popular Halloween event draws big crowds, so try to get there early.

When do you think is the best time to visit Six Flags Great America? How crowded was it when you went? Be sure to let us know in the comments below!