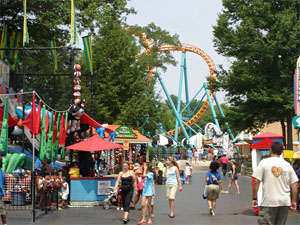 When is the best time to go to Six Flags America?

Not to be confused with Six Flags Great America, this Six Flags park is located outside of Washington D.C. and 30 miles away from Baltimore. With over 50 rides, including 8 roller coasters, and the Hurricane Harbor water park, it’s a popular destination for thrill seekers and families.

So when is Six Flags America least crowded? The park is open from late March through October and crowds vary from season to season. Here’s what you need to know about the park’s attendance throughout the year.

Opening Day – Six Flags America typically opens for the operating season on the last weekend of March or early April, and crowds generally aren’t too bad for opening weekend.

Spring Break – Crowds are usually manageable for Spring Break week in April. For the shortest wait times, try to get there early and go on a weekday (Monday-Friday).

After Spring Break, the park is only open on weekends in April, and crowds again aren’t too bad. It’s least crowded on Sundays.

Weekends – The summer crowds haven’t arrived just yet, so May is another great month to head over to Six Flags America. The park is open on Fridays and weekends, and it’s busiest on Saturdays.

Summer Season – Six Flags America is open everyday in June. More schools in the area start to get out for the summer later in the month, so the earlier in June you go, the less crowded it will be. Weekdays are your best bets for lighter crowds.

4th of July Weekend – The summer crowds are out in full force by July, and it’s typically very crowded for the 4th of July holiday.

Weekdays – Six Flags America is open for the first couple weeks in August, as the summer season winds down. Crowds tend to pick up on Fridays; Mondays-Thursdays are your best bets for a less busy park.

Labor Day Weekend – Six Flags America is typically busy for the three-day weekend. Get there early.

The rest of September is pretty quiet, as the summer crowds are finally gone. The park is only open on weekends (some days are closed for private events) and crowds are usually light.

Fright Fest – Fright Fest takes over in October on weekends and the last two Fridays of the month. Attendance is typically lightest on Sundays. If you arrive at the park early, crowds tend to be very manageable.

When do you think is the best time to visit Six Flags America? Was it crowded when you went? Be sure to let us know in the comments below!