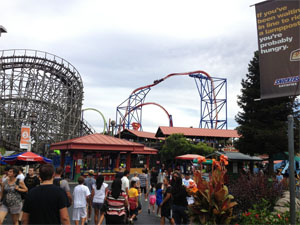 When is the best time to go to Six Flags Discovery Kingdom?

Located just outside of San Francisco, Discovery Kingdom (formerly Marine World) is home to 45 rides, including 8 roller coasters. The park recently moved to a year-round schedule, joining Magic Mountain as the only Six Flags parks with a full operating season.

Six Flags Discovery Kingdom is a popular destination for locals and tourists alike, but when is it least crowded? Let’s take a look at what the crowds look like throughout the year.

New Year’s Day – Holiday in the Park extends through the first week of January, but the bulk of the holiday season crowds are gone after New Year’s Eve.

MLK Weekend – Crowds at Discovery Kingdom are expected to be manageable for the 3-day weekend.

Presidents Day – Crowds are expected to be light throughout weekends in February, but may pick up a bit for Presidents Day Weekend.

Spring Break – Discovery Kingdom is expected to be crowded for the Spring Break season starting on the week before Easter through the week of Easter, as schools in the area get out of session. Aim for going on weekends early in March to avoid the big crowds.

Memorial Day Weekend – Fridays and Sundays in May are your best bets for lighter crowds, as the park starts to get busier for the summer season. Memorial Day Weekend, which marks the start of daily park openings, is traditionally very busy.

Summer Season – The earlier in June you go, the lighter the crowds tend to be. By mid-June, most schools are out for the summer and it’s crowded even on weekdays. Avoid going on Saturdays if you can, as it’s the busiest day of the week.

Summer Season – The summer crowds start to die down in August. This time, the later in the month you go, the lighter the crowds will be as more schools get back in session. Crowds are usually manageable again by mid-August.

Fright Fest – The annual Fright Fest takes over Discovery Kingdom in October. Like most Halloween events at other parks, the earlier in the month you go, the shorter the lines will be. Crowds peak around Halloween, so try to go early in the season.

Veterans Day Weekend – Crowds are typically very manageable throughout November, but pick up a bit for the holiday weekend. Saturday, Sunday, and Veterans Day are usually busier.

Holiday in the Park – The holiday season takes over Discovery Kingdom in December, with crowds peaking on Christmas week. The park is closed on Christmas Eve and Christmas Day.

When do you think is the best time to visit Six Flags Discovery Kingdom? How crowded was it when you went? Be sure to let us know in the comments below!