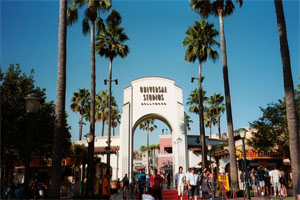 Known as “The Entertainment Capital of L.A.,” Universal Studios Hollywood is the very first Universal Studios theme park and is located less than an hour from Disneyland. The park is still a working movie studio, and features many rides, shows, and attractions from the big screen.

Universal Studios attracts millions of visitors each year, making it one of the most popular destinations in all of Southern California, but when is the best time to go? Let’s take a look at what kind of crowds to expect throughout the year.

New Year’s Day – The holiday season crowds are still around for the first week of the New Year. The off season (and shorter lines) doesn’t usually begin until after the first weekend of the month.

MLK Weekend – Weekdays and weekends after the first week of January are traditionally manageable, but it does get busier for MLK Weekend. Plan on that Saturday, Sunday, and Monday (MLK Day) to be crowded.

Spring Break – Aim for going early in March if you can. The Spring Break crowds start to pick up by the end of the month as schools get out of session, peaking on the week before Easter and the week of Easter.

Weekdays – Crowds aren’t too bad at Universal in most of May. Saturdays are still busy, but weekdays and Sundays tend to be manageable.

Memorial Day Weekend – The three-day weekend marks the start of the summer season as more schools get out of session. Plan on that Saturday, Sunday, and Monday to be crowded. The weekdays after Memorial Day are manageable.

Summer Season – For shorter wait times in June, try to go on weekdays early in the month. Weekends in all of June are crowded, and weekdays are packed as well by the last week of the month.

4th of July Weekend – Universal Studios is typically very crowded for the 4th of July. Try to arrive early.

The summer season is in full swing by July, and most days are very busy. Avoid the weekends if you can. Weekdays (Monday – Thursday) are your best bets for lighter crowds.

Summer Season – The summer season crowds are still out in early August, but start to die down on weekdays by the last two weeks of the month. Saturdays and Sundays are still crowded.

Labor Day Weekend – The summer crowds are back for the three-day weekend. Be prepared for that Saturday, Sunday, and Monday to be busy.

Weekdays – The summer season crowds are gone completely after Labor Day, with manageable weekdays. Saturdays are most crowded.

Check out our updated Halloween Horror Nights: Best & Worst Dates to Go crowd guide, with our handpicked best and worst nights to visit HHN every year.

Veterans Day Weekend – Weekends in November are traditionally busy, including the holiday weekend. Crowds are usually light on weekdays.

Thanksgiving Weekend – Universal Studios gets crowds for the extended weekend starting on Thanksgiving Day through Sunday.

Grinchmas – Grinchmas takes over Universal for the holiday season in December. Expect weekends to be busy, while crowds are manageable on weekdays for most of the month. The holiday crowds peak at the end of December, so be prepared for some of the biggest crowds of the year on the week of Christmas (including Christmas Eve and Christmas Day) through the end of the year (New Year’s Eve).

For crowd predictions of upcoming dates, as well as historical crowd ratings, check out the Universal Studios Hollywood Crowd Calendar.

For live crowd updates and conditions at the park, check out the Universal Studios Hollywood Crowd Tracker.

When do you think is the best time of the year to go to Universal Studios Hollywood? How crowded was it when you visited? Got any crowd tips?